Waiting on Wednesday: Hammers on Bone by Cassandra Khaw 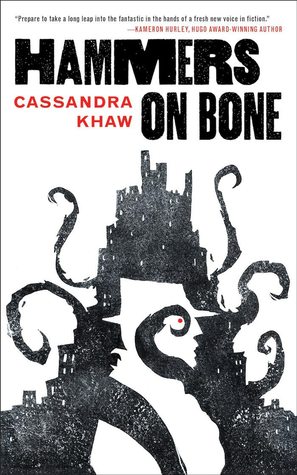 Hammers on Bone by Cassandra Khaw:

John Persons is a private investigator with a distasteful job from an unlikely client. He’s been hired by a ten-year-old to kill the kid’s stepdad, McKinsey. The man in question is abusive, abrasive, and abominable.

He’s also a monster, which makes Persons the perfect thing to hunt him. Over the course of his ancient, arcane existence, he’s hunted gods and demons, and broken them in his teeth.

As Persons investigates the horrible McKinsey, he realizes that he carries something far darker. He’s infected with an alien presence, and he’s spreading that monstrosity far and wide. Luckily Persons is no stranger to the occult, being an ancient and magical intelligence himself. The question is whether the private dick can take down the abusive stepdad without releasing the holds on his own horrifying potential.

Why I’m waiting for Hammers on Bone:

I’m still digging Tor.com’s short fiction so obviously I’m not gonna pass up a book with a cover like that.

Reading the synopsis of Hammers on Bone already makes me sad this it is only a novella. A guy who not only hunts gods and demons but is monstrous himself? Sign me up! The summary is full of awesome which hopefully doesn’t promise more than those few pages can handle.