The Month of the Silvers: Kick-Off

It’s here! Today is the release day of the paperback edition of The Flight of the Silver with its shiny new cover and that means it’s also the start of The Month of the Silvers!

We have some posts planned for the next couple of weeks, including an interview with Daniel Price, a read-along, a book-related game and more.

01/17/15: Book recs based on the main concepts of The Flight of the Silvers (@ buechermonster.de)

Inspired by the bookish games over at Oh, the books, we decided to adapt a board game for The Month of the Silvers. Everyone can play, it doesn’t matter if you’ve read the book or not! Even though we designed this game to match the book, it won’t be necessary to know/remember anything about the story but you also won’t be spoiled in case you still want to read it.

The game we chose is Scotland Yard. This as a pursuit-evasion game, where one player (Mister X) is chased by detectives of Scotland Yard.
In our game, it’s not the bad guy though who is chased, but the Silvers! In the book, the Silvers are up against different opponents. They travel across the country, trying to hide and not to be found by any of these groups.
It’s also not set in London, like the original game, but we chose San Diego because it’s place the Silvers actually visit in the book. 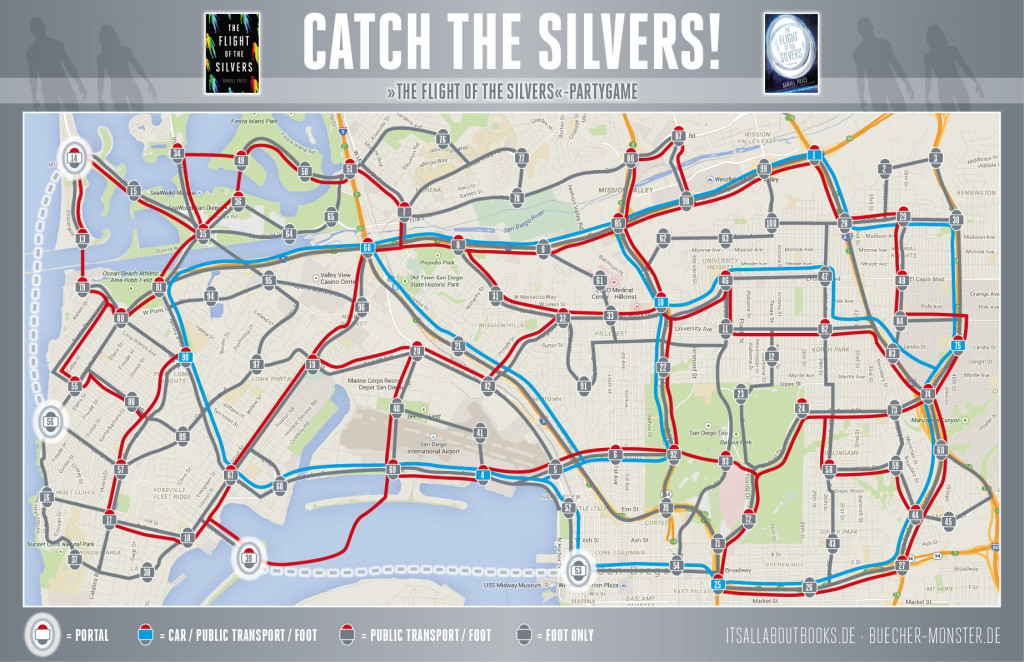 And now the flight of the Silvers begins! Each group gets a certain number of tokens that allows them to travel:

Every group has to make one move every round (there will be one round every two days). To keep the Silvers’ location secret, they will get a private forum where they can discuss their next move. The opponents can discuss their moves in the open one that everyone can access.

To be able to find the Silvers, they have to reveal their position every 5 moves, starting from the 3rd.

The Silvers wouldn’t be the Silvers if they didn’t have some awesome powers though which they can use one time:

The game ends when

Every member of the winning group will get signed Silvers swag!

Want to play the game?

Enter until 01/10/15 with a comment stating that you want to play and you are in! You will get your role in the game in an email on January 11th.