Why I love villains

I’ve always been fascinated by evil and don’t make a secret out of rooting for the bad guys. For the longest time I only read thrillers because I thought there is nothing more fascinating than reading about people who can’t stop killing others.
I love my villains, they have a special place in my heart and some of them are obviously just poor misunderstood creatures (not really, but I like to pretend).

Loki and Victor Vale are just two of many anti-heroes who I love. There are also the ones that are bad through and through, like Voldemort from Harry Potter or Mayor Prentiss from Chaos Walking. I love* them all for very different reasons, but liking them always comes down to just one thing: they are interesting.

(*loving/liking as a character, not a person, obviously, at least in most cases)

I love villains for pretty much the same reason as for why I prefer fantasy over every other genre: I want to read about things I don’t experience myself. And that doesn’t just include having an adventure in a world that doesn’t exist or getting to see dragons, doing magic, or traveling through time. I also like to see people do evil things because it’s something I wouldn’t do myself. Not that I want to do that, like I want to get to see a dragon, but it’s something you don’t interact with every single day, it’s not “normal”. I want to explorer the villain’s thoughts, learn what makes them the evil person they are, I want to try to understand a villains’s thoughts because I would never have these kind of thoughts myself.

Villains are so much more interesting than the heroes because they do the things you don’t expect, things you wouldn’t do yourself. Every character has a backstory, a story that explains what makes them the person they are, but for villains, this is 100x more interesting. What does it take to turn a person into an evil mastermind? Did they just snap and suddenly decided to be evil? Did a certain event push them into doing evil things? There are so many options and there isn’t a single one of them about which I could say “sounds familiar, I would turn evil too if I had gone through that” and THAT is what makes them so fascinating to me. The unfamiliar.

Types of villains that I love

There are all kinds of villains our there but I can easily sort my favorites into two different types of villains.

The villains I love to hate

This is the kind of villain that would actually scare the shit out of me and make me run away screaming if they were real people. Living in the world of Harry Potter, I would be too scared to say Voldemort’s name out loud too. If I lived on Patrick Ness’ New World, I would probably easily be manipulated by Mayor Prentiss, because let’s be real, that guy is a master manipulator and evil genius.

What fascinates me most about them is that they know they are the evil guys and they don’t care. All they care about is what they want and how to get it. Reading about them justifying their actions, seeing them spinning their evil plans, not caring who they hurt in the process is so much more interesting than the hero who just tries to save everyone (they love).

This is actually my favorite kind of villain. Characters who do evil but often seem more like they could need a hug and all would be well. Characters who use some strange logic to explain their actions because really, they only want the best for everyone, they aren’t actually the bad guys here. Villains who don’t understand that they are the evil guys and think their justification for evil behavior is entirely plausible and why can’t everyone see that?

It might be weird to actually love these characters, but I would definitely give them a hug if I met them. They obviously aren’t really bad, just misunderstood and need someone to get them on the right track again. Who cares that they might have killed someone here and there, it’s just their poor broken heart that needs fixing. 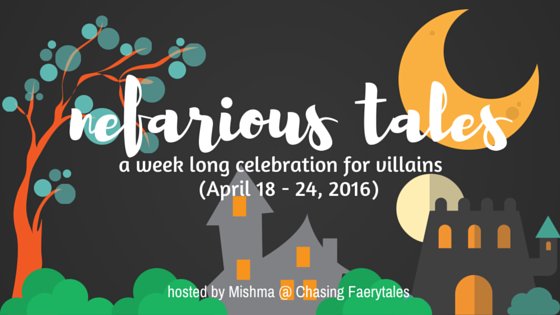 This post is part of Nefarious Tales, a week-long event hosted by Chasing Faerytales to celebrate villains. Check out Mishma’s blog for more villainy posts all week and a giveaway, or the following blogs for your dose of evil for today: